As published in Builder/Architect Magazine

Ingram Construction Corporation doesn’t aspire to be the biggest construction company in New Hampshire, only the best. Founded in 1981 by Bill Ingram, and now managed by and jointly owned with son, Jeffrey Ingram, President, “the company’s goal has always been to remain small enough to maintain first-hand awareness of all that is happening within our business,” says Bill. With only 15 employees, Ingram is small. But with three Ingrams involved, “the chances are really good that you’ll talk to an Ingram when you call,” says Steve Ingram, Project Manager. All Ingrams agree that they like it that way. Their size ensures that they can provide their customers with the personal contact, trust, and quality workmanship they deserve.

Bill started in the construction industry after WWII, when the GI Bill provided tools of the trade for him. Jeff always wanted to be in the construction business and a high point for both sons was the occasional business road trip with their father. “Today,” Jeff says, “I’m fulfilling my boyhood dream.”

From Keene to Canada, a Niche in Restorations 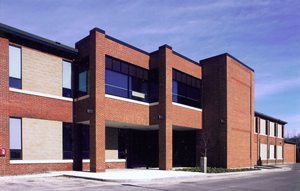 Ingram typically works within a 100-mile radius of the Keene area. Most of their work is in the Connecticut River Valley, southwest Vermont, the Champlain Valley, and the Hanover and White River Junction area. They basically work “from Keene to Canada,” on a variety of projects ranging from historical restoration and preservation jobs to institutional renovations to new commercial construction, from jails to schools to senior citizen housing projects. Because in many cases it is more cost-effective to restore a building than to build it from scratch, many buildings that would have been torn down 50 years ago are now being preserved and restored. So Ingram Construction has found a niche in this arena, and they excel at it. The featured project is, appropriately, a restoration of a turn-of-the-century brick building that houses Home Healthcare, Hospice, and Community Services (HCS), in 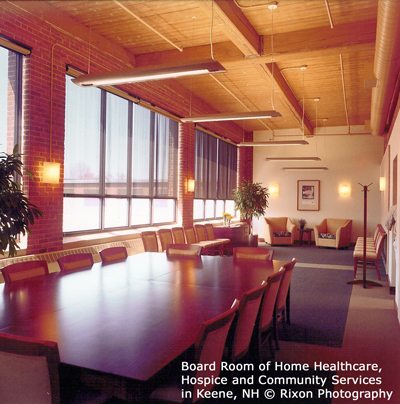 Ingram Construction completely restored the 30,000 square-foot building, which was originally built in 1920 for the W.H. McElwain Company. Work included a complete gut and rehab of the building’s interior providing modern infrastructure and finishes while retaining many of the building’s original architectural elements. Barbara Duckett, CEO of HCS, says, “Ingram Construction was terrific to work with. We could not have asked for a better partner. It was a three-way partnership with the builder, architect and owner all the way!”

Other memorable restoration projects include The Chase House in Cornish, New Hampshire, and the Cornish Town Hall. Bill remembers The Chase House (now a B&B) fondly, as much for the challenge of remodeling the original house and a $1M addition, as for the daily fresh baked goods from the owners. It was, Bill says, “a real people project.” The Cornish Town Hall is memorable for an entirely different reason ” it happened to house one of the largest bat colonies in the state! The restoration was completed, but the bats remain”

A 10,629 square-foot expansion to the Cedarcrest Foundation in Keene, a 24-hour live-in home and school for children with disabilities, is Jeff Ingram’s particular favorite. “It was a good job to be involved with, the Cedarcrest family does so much for the kids, and we consider ourselves extremely lucky to be a small part of it,” he says. The Foundation’s Executive Director, Cathy Gray, echoes the sentiment, saying that “It was clear that the Ingram team understood that improving the facility meant improving the children’s learning environment and quality of life.” Throughout it all, the team was most “respectful of the children and their families.”

Everyone who deals with the Ingrams talks about their honesty and professionalism. Dan Church, CEO of The Rowley Agency, Inc. (Concord, New Hampshire), who has worked with the Ingrams on all their insurance and bonding needs since the mid-1970s, puts it this way: “We have had such a long and great relationship because of the Ingrams’ open and honest approach to business. They are honorable men doing an honorable profession.” Keith Thibault, Housing Director for Southwestern Community Services, says, “The Ingram team always looks at what they can contribute to a project, never at what they can get out of it. They take pride in relationships and products — a quality that sets them apart from other companies. I can always breathe a little easier when we are working with them.”

Not surprisingly, the Ingrams view the construction business as an industry of professionals” and agree that, “Building is a good life, an honorable way to make a living.”The Ingrams provide quality construction at a competitive price, in a collaborative environment built on trust and confidence. But, as Jeff says, they know that trust is “not something you inherit when you walk in the door. It is something you have to earn.”

The Ingram Philosophy — Involved at Every Stage

The Ingrams believe that the keys to success are involvement in every stage of a project, rock-solid financial stability, creative brainstorming and an empowered field team.

Involvement means that customers see the same faces at the beginning of a project, during the project, and at the successful completion of the project. The Ingram relationship extends from planning to the final nail being driven. By doing some up-front creative brainstorming (or value engineering), the Ingrams can look for ways to bring a project in, under budget, while still delivering the quality the customer expects. And even though they are small, Ingram’s financial stability puts an end to all questions about having the muscle to do the job. As Bill says, “We pay our bills on time, and the industry knows that. If you don’t, word gets around fast.”

The Ingrams consider their field operations management team integral to the success of the company. “They are our friends and co-workers, not just employees.” All Ingram superintendents and craftspeople are exceptionally talented, well capable of carrying out company policies, trained and certified by OSHA, and trusted by the Ingram management team. They all take pride in their work, and feel empowered to make decisions in the field.

“Back to the Future” — Workmanship and Relationships that Last

Bill first started in the construction business as a plumber and his first job was at the newly founded Marlboro College, in Marlboro, Vermont. Last fall, Ingram Construction began remodeling the offices in that original farmhouse (now the administration building). Luke Ingram, Steve’s son and Bill’s grandson, then 16, was doing work on the site — in the same room his grandfather had worked in half a century ago. Bill pointed to the heating system he installed in 1949 and said, “I must have done a pretty good job. It’s still here.”

This history stands as proof that Ingram Construction’s “honorable professionalism”, characterized by quality workmanship and lasting relationships, can stand the test of time. It is a committed family business that spans generations, and the Ingram’s determination to be the best will continue to move them forward by going “back to the future.”